Some of you ladies have been enquiring lately about running an ultramarathon and the type of training one should do to prepare for such long distance runs. I don’t have all the answers for you but so that you may get a glimpse into the type of mindset and physical endurance you will need to tackle any of type of ultra-distance event, I am going to post a three-part series of journal entries that I wrote about the New Zealand ultramarathon I raced in earlier this year.

Part One – Am I Crazy To Consider Running an Ultramarathon?
I’m not entirely sure when I first started toying with the idea of running an ultramarathon, but I can say that it was probably after Anna and some of the other ladies returned from Mongolia last July and I heard the great news that Anna had done exceptionally well in the 100k event. I remember feeling incredibly proud of her accomplishment, yet void of any inclination to want to run an ultramarathon (which is why I am unable to determine when exactly I started to think otherwise). In all honesty, my decision was most likely influenced by the simple fact that the same group of girls who traveled to Mongolia, were also willing to travel to my homeland in New Zealand and run an ultramarathon in the northern part of the country. So here I am,
just weeks away from running my first ultra, and I’m wondering if I have got myself into something I’ll later regret. The thing is, I want to believe that my latest running endeavor is perfectly normal and not nearly as extreme as some people have suggested, but sadly I haven’t reached that conclusion, yet!

See, here is the dilemma I face – recently I received an email from one of my daughter’s high school teachers, asking me to clarify the difference between a marathon and an ultramarathon. The following dialogue is what ensued:

Teacher:I can’t help but wonder what the human body is capable of? When we push ourselves to physical and/or mental limits, at what point will the body or mind self destruct?

Me:Well, let’s see…… given that I am a 40 year old woman with a clean bill of health, both physically and mentally (according to my physician’s most recent assessment), and the only “bad” habit I supposedly have is my love of running, then I’m willing to take that gamble. Life is too short to spend it doing things that are neither meaningful or enjoyable, and if seeing the world by running along some of the most beautiful trails enables me to avoid such a tragic lifestyle, then that is how I will continue to live my life – at least as long as my mind and body enables me to and doesn’t “self-destruct.”

Teacher:Interesting thoughts. I have a lot of admiration for people like yourself who push themselves for excellence and live life rather than stagnate and become part of the growing population of the living dead. At 63, if my wife and I could climb Mt. Fuji together that would be quite an accomplishment for me. I’ve always wanted to do that. I find your life philosophy very inspiring. One that I strive to emulate. Keep on, keeping on.

I cannot deny that I felt a certain sense of smugness when my daughter’s teacher conceded to my way of thinking, but that feeling lasted just a few days and ended when the weekend rolled around with long runs planned for both Saturday and Sunday. Having successfully completed back-to-back long runs the weekend before, I wouldn’t have felt so miserable about the runs that lay ahead except for the fact that it was wet, windy, and damn cold!

Saturday’s run was looking to be bad enough with the harsh weather conditions, but since Anna was going to be joining us I knew that it was going to be a tough run for Andrea and I. Anna has a tendency to push us out of our comfort zones, a trait of hers we often “affectionately” criticize her for but which we also accept is needed from time to time. This particular morning we were in no mood for any type of motivational tauntings, and so it was with great relief when Anna left us after the first hour and a half to go lead the fast pack on our scheduled WOOT run.

With Saturday’s run under our belt and a sense of achievement at having successfully completed the full three and half hours in less-than-desirable weather conditions, Andrea and I tried to remain positive about the three hour run we faced the very next morning. During the remainder of the day and into the night however,  the wind and rain picked up and by Sunday morning I felt depressed at having to get up. My mind sent a barrage of negative messages to my tired body, not realizing that such negative self-talk would culminate in an even worse run than I imagined. As I prepared to head out the door, I pathetically checked my email inbox one more time desperately hoping that Andrea may have had the good sense to cancel our run; no such luck.

Decked out in long winter-layered running pants, a wind-breaker jacket, thick gloves, and a baseball cap which gratefully steered the raindrops down over the visor and away from my face, I met Andrea and together we set out to brave the nasty elements. We were perhaps no more than twenty minutes into our run when the first hint of pain registered in my right ankle. Not willing to yield to defeat so early into our run, I  refused to acknowledge its presence and consequently spent the following two days with my right foot strapped in an ankle brace and me starting to wonder if I might have slightly misled my daughter’s teacher with my “life is too short” spiel.

This week’s ultratraining tip:
Choose a hydration pack that is able to store enough water and food supplies to keep you well-fueled for at least a three-hour period. The one that Anna, myself and Andrea used was the Camelbak Octane – the main appeal of this particular pack was that it has side pockets which we could easily access without having to take the pack off. One thing we will all attest to is that after running for more than five or six hours, something as simple as taking off a pack to remove food supplies quickly becomes burdensome and difficult. 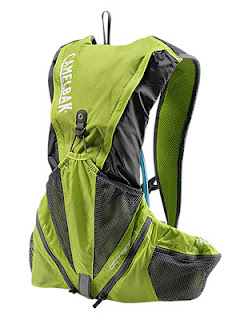 Watch for specials at the BX – this camelbak retails for more than $50 or $60 but we picked them up on sale for less than $30.

3 thoughts on “Ultramarathon Series – Part One”