It occurred to me the other morning, while running alone in the dark, that it would be easy to trip over something unseen and seriously hurt myself. I thought about this because I had recently seen a Facebook post by a friend who, in the early hours of the morning, almost knocked himself out while shutting the hood of his car. I wasn’t going to name names, but since you said it’s okay Paul, I’ll go ahead and tell your story.

Paul was in the carpark of the Foster Pool at 4:50am, ready to start his Masters swim workout, when he accidentally closed the hood of his car on top of his head. Anyone who knows Paul, knows that he has an unfortunate tendency to injure his head. But that’s not where I was going (sorry Paul, couldn’t resist); the point I want to make is that his injury (shown below), could have  been much worse. It’s possible that an accident of this nature could have resulted in unconsciousness, and had that been the case and no one was around to identify him, he would have been carried off to the hospital as “Mr Nobody.” 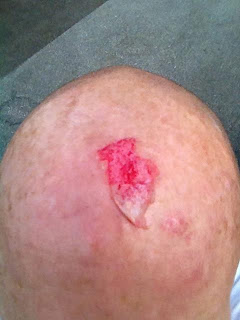 My husband has often suggested to me that I carry some form of ID on me while running, and while I know I should, I hardly ever do. Living in Okinawa has lulled me into a sense of complacency that’s fooled me into thinking I will never need it. In fact, the only time I ever carry ID on my runs with me, is if I know I will be running through one of the base gates. Otherwise it’s either my water bottle and house key that leaves the house with me, or nothing at all.

But lately I’ve been thinking; would it really be so bothersome to carry some ID with me? Wouldn’t it provide me (and my husband/family members) with a greater sense of security, knowing that I’ll receive a much more expedient level of care if I did happen to wind up on the side of the road, in need of emergency medical attention?

So here’s what I have decided – to purchase a RoadID wrist band:

If you think this might be a good idea for you too, please keep an eye on the WOOT/WOOP announcements, as the company, RoadID, has offered us a one-time 20% discount on any of their products. See the link below to their website:

Let’s be safe out there on the roads!